“In these challenging times we need black and brown female voices more than ever, so that our nation’s song of freedom is truly in tune with our moral consciousness, and that keystone voices keep us in rhythm with justice and collective freedom.” That is a quote from Sheneika Smith‘s guest column in the Asheville Citizen-Times, “Women of color are missing link for political progress.” In it, she describes the history of the disenfranchisement of black women and states, “The real question we must ask ourselves is: what kind of country would we currently be living in today if we had centered black women as thought leaders generations ago? What greater gains would we have made in the public realm if these voices had been included at the table come decision making time?”

As I’ve mentioned in previous posts, Sheneika is running for a seat on Asheville City Council. Find out more at sheneikaforasheville.com.

An important story in this week’s Mountain Xpress is, “Legacy of loss: Food insecurity and its disproportionate impact on Asheville’s black community.” In it, writer Erin Daniell tells some of the story of of the Southside neighborhood.

Excerpt: “Longtime residents of Southside harbor strong feelings to this day about the effect urban renewal had on their community. ‘I think that they bullsh*tted people around in that [urban renewal] time,” says [Hanan] Shabazz (pictured). ‘They took people’s property and displaced them, and you know these people had houses and they were run-down houses, the majority of them, but nevertheless they were homes. I felt like they [city officials guiding the East Riverside urban renewal project] actually put people [Southside residents] in a position, thinking that they were bettering themselves, and they wind up losing all of their independence and everything, and they start placing them in concentration camps.’

Shabazz refers to public housing apartments as concentration camps because most of the complexes in Asheville have only one entrance/exit that is often watched by a security guard. To Shabazz, the displacement of community was the worst consequence of the East Riverside urban renewal project.”

How Asheville, a city in which many pride themselves as being progressive, can be so passive about the concentrated, generational poverty and trauma experienced by the predominantly African American population living in public housing is beyond me. I guess I do know one way it persists – white progressives are unaware of the realities of our public housing neighborhoods, having never even visited them.

On a more positive note, a few of the Buncombe County Isaac Coleman Economic Community Investment grants were awarded to groups based in, or serving people who live in, the Southside neighborhood.

That Xpress story is related to the Asheville Blade‘s piece about the City’s RADTIP project entitled “Running dry.” Summary: “Old wounds, segregation, a lack of transparency and skyrocketing costs all collide as the city’s ambitious plans to overhaul the river district flounder.” Reading about this situation, I see a repeat of the type of governmental decisions that have left Southside struggling again and again.

Excerpt: At a meeting Vice Mayor Gwen Wisler asked, “’Why didn’t the staff let Council and the public know about the size of the overruns and allow the public to weigh in on the portions of the projects that were being delayed and how that selection was being made?’

One of the major points of the project, she emphasized, was ‘connectivity of some of our underserved communities to economic opportunity and other community facilities. How was that overriding equity issue addressed?’

Indeed the plans to improve Livingston Street, or the equity aspect, weren’t even mentioned in either the staff memo (which emphasized the aspects of the Dykeman program RADTIP would still fulfill) or Monson Dahl’s presentation.”

Since this story came out, the city has created opportunities for community input about RADTIP, let them hear from you: Click here for details.

Did you know Langston Hughes spoke at the Allen School in Asheville in 1949?!?! Neither did I, even though I am a huge fan of his writing and of local history. As a recent Mountain Xpress story explains, part of why his visit has stayed under the radar is that it was not covered in the Citizen-Times. This is one of countless examples of how black history and stories have been rendered invisible. A case could be made that this type of omission happens to this day, because most of us, including members of the media, live in social segregation. As we look for ways to change this pattern, we can turn to Darin Waters, Ph.D. and the team at UNC Asheville organizing the 4th African Americans in WNC conference (this year to be held Oct. 19 – 21) to create a more inclusive narrative.

Get your tickets to the WRES Banquet! 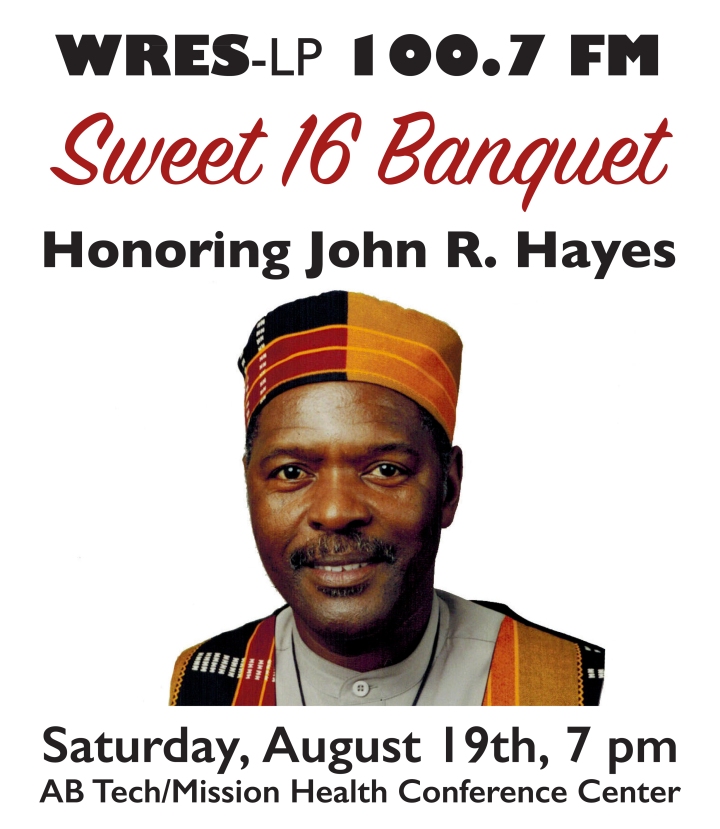 On Saturday, August 19, 7 pm at AB Tech/Mission Health Conference Center, celebrate the 16th Anniversary of WRES 100.7 FM by honoring John R. Hayes for his many contributions to the community. Proceeds will go to support the Empowerment Resource Center and WRES FM. Tickets are $25 per person and are available for purchase at wresfm.com or at the station, 91 Patton Ave.

Greetings reader: You can subscribe to have new posts delivered via email for free (sign up in sidebar or below if you are on a device). If you find this site valuable, you can become a sustaining patron on Patreon or you can make a one-time or monthly donation via PayPal or a credit card. Thanks for helping sustain this resource on community action towards collective liberation.